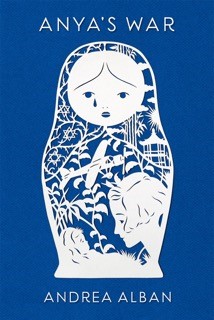 Anya Rosen and her family have left their home in Odessa for Shanghai, believing that China will be a safe haven from Hitler's forces. At first, Anya's life in the Jewish Quarter of Shanghai is privileged and relatively carefree: she has crushes on boys, fights with her mother, and longs to defy expectations just like her hero, Amelia Earhart.
Then Anya finds a baby―a newborn abandoned on the street. Amelia Earhart goes missing. And it becomes dangerously clear that no place is safe―not for Jewish families like the Rosens, not for Shanghai's poor, not for adventurous women pilots.

Based on a true story, Anya's War by Andrea Alban is a rich, transcendent novel about a little-known time in Holocaust history.

What sparked your imagination for Anya’s War?

I grew up surrounded by opera music and listening to my father’s exotic tales about growing up in Shanghai’s French Quarter. When he was 8, he found a baby girl abandoned in the alley behind his house. He picked her up and brought her home. He assumed his mother would raise the little girl. But there was a cholera epidemic and it was wartime. My grandmother made my father put the baby back on the curb. I thought about that baby for most of my childhood and wondered if I could save her in the pages of a novel.

Anya and I both have “expressive curls.” We are bold adventurers and look for justice for the oppressed. We talk a bit too much and dream of making a difference in the world.

How is she different?

Anya fell in love with a boy who was a snob. I wouldn’t have given Bobby Sassoon a second glance or chance. Anya likes beef piroshki. I am mostly a vegetarian. Anya had a brother she could push around. My sister, although younger, is three inches taller than me.

What did you want to be when you grew up?

A novelist and a mother.

As a young person, who did you look up to most?

My second and third grade teacher, Miss Aitken. She “followed” her second graders to third grade. I was so excited to learn from her two years in a row. She was a poet and a tour guide—we took field trips to the Cable Car Museum, a fortune cookie factory, a sausage factory, etc. in San Francisco. She championed each of her students and wrote a poem about us for our graduation from third grade.

What is your favorite word?

If you could live in any fictional world, what would it be?

What’s the best advice you have ever received about writing?

From Anne Lamott: “Write a shitty first draft.” Those words freed me to write, write, write without letting my inner critic edit my words (until I finished a first draft).

What advice do you wish someone had given you when you were younger?

Don’t listen to the adults who insist that becoming a doctor or a lawyer are the only noble professions, and the way to make a good living.

Do you ever get writer’s block? What do you do to get back on track?

I have a different name for writer’s block. I call it writer’s interlude. This reframes the negative aspect of a block and gives me permission to take the time and space to create the next scene in my active imagination.

If you were a superhero, what would your superpower be?

Bring peace of mind to every human and animal.

What would your readers be most surprised to learn about you?

I can hike straight to the top of Mt. Tamalpais and I became a yoga teacher at age 55.


“Based on the author’s life, it is a book with history, drama, and good writing.” – Association of Jewish Libraries Reviews

“The characters, and most notably Anya, are well crafted and believable.” – The Bulletin

“An important addition to the literature about WWII refugees.” – Booklist

“Based on the author’s own family history, the story explores a relatively unknown aspect of the Jewish diaspora in the years before World War II.” – School Library Journal

“A delightfully textured . . . glimpse at a little-remembered period of Jewish history.” – Kirkus Reviews

Do! Judge A Book By Its Cover–Issue Fifty-One: Historical Fiction (Part 7)