Cecil B. Demille: THE ART OF THE HOLLYWOOD EPIC 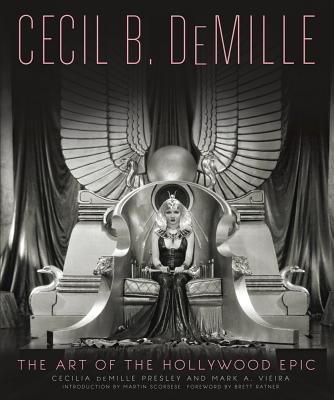 Colossal. Stupendous. Epic. These adjectives, used by movie companies to hawk their wares, became clichés long ago. When used to describe the films of one director, they are accurate. More than any filmmaker in the history of the medium, Cecil B. DeMille mastered the art of the spectacle. In the process, he became a filmland founder.

This lavish volume opens the King Tut’s tomb of cinematic treasures that is the Cecil B. DeMille Archives, presenting storyboard art, concept paintings, and an array of photographic imagery. Historian Mark A. Vieira writes an illuminating text to accompany these scenes. Cecilia de Mille Presley relates her grandfather’s thoughts on his various films, and recalls her visits to his sets, including the Egyptian expedition to film The Ten Commandments.

Like the director’s works, Cecil B. DeMille: The Creation of the Hollywood Epic, is a panorama of magnificence—celebrating a legendary filmmaker and the remarkable history of Hollywood.

by Cecilia de Mille Presley and Mark A. Vieira

To Be Published by Running Press November 26, 2014