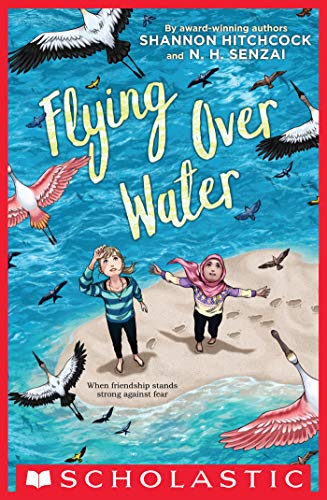 Shannon Hitchcock and N.H. Senzai expertly craft the intersection of the lives of two girls-one, a Muslim fleeing civil war, the other, an American from the South-as they are forced to examine their beliefs and the true meaning of friendship in the midst of the president's 2017 Muslim ban.

Twelve-year-old Noura Alwan's family is granted asylum in the United States, after spending two years in a Turkish refugee camp, having fled war-torn Aleppo. They land in Tampa, Florida, on January 30, 2017, just days after the president restricted entry into the US from nations with a Muslim majority population.

Twelve-year-old Jordyn Johnson is a record-breaking swimmer but hasn't swum well since her mom had a miscarriage during one of her meets. Her family has volunteered to help the Alwan family through their church. She knows very few people of Arab descent or who practice Islam.

The girls' lives intersect at Bayshore Middle School where Jordyn serves as the Alwan children's school ambassador. Noura knows that her family is safe from the civil unrest in her home country but is not prepared for the adversity she now faces on American soil. Jordyn is sympathetic to Noura's situation, but there are other members of their Florida community who see the refugees' presence to be a threat to their way of life.While the president's Muslim ban tests the resolve and faith of many, it is friendship that stands strong against fear and hatred.

Authors N.H. Senzai and Shannon Hitchcock stop by Nerdy Book Club to share the cover of their upcoming book, Flying Over Water, how the story began, and their collaborative process writing the book.

What inspired this story?

Shannon: My friend’s daughter converted to Islam and that piqued my interest in the religion. I started researching Islam, not entirely sure of where the journey would take me. Around that same time, I saw a picture in my minister’s office of a Syrian refugee and her young son. They held a handwritten sign that said, WE ARE FROM SYRIA, CAN YOU HELP US? I started writing a story about a Christian girl whose church is helping a Syrian refugee family.

Naheed: When I read Shannon’s initial draft, I immediately connected with Jordyn and Noura’s story. My previous book, Escape From Aleppo, was about a family fleeing the Syrian Civil War who ended up in a Turkish refugee camp. So, for me, Noura’s story provided an opportunity to explore what would happen to such a family if they were granted asylum in the United States. As I brainstormed with Shannon, I proposed that we should begin the story with President Trump’s Muslim ban and incorporate the current political environment our nation, and its children, are facing.

Why is own voices so important?

Shannon: My initial draft was told entirely from the viewpoint of a white Christian girl, but in retrospect it was centered in the wrong place. Think of it this way, which is more interesting—the story of a refugee filtered through the lens of her friend, or the story of a refugee told in her own voice? It’s easy for writers to get defensive when talking about who should tell which stories but collaborating strengthened this book. The Muslim family came alive in a way I hadn’t managed on my own.
Naheed: When Shannon invited me to take on Noura’s POV, I saw her commitment to own voices narratives. My previous book was about a Syrian girl fleeing war in Aleppo, and although I’m not Syrian or Arab, I am a Muslim who’s lived and traveled extensively in the Middle East. My husband is a professor of Middle East Politics and we are well versed in the politics and history of the region. I also had Syrian friends read the manuscript so that I could accurately capture the nuances of Syrian culture and traditions.

What challenges did you face as co-authors and how did you tackle them?

Shannon: For me the challenge was letting go of what I had written in the first draft and being open to Naheed’s suggestions. It involved listening and sometimes letting her ideas marinate before responding. I had originally set the manuscript in 2015 and used the San Bernardino terrorist attack. Naheed felt that was old news and we should use the 2017 Muslim Ban. She was exactly right.

Naheed: Before deciding to work with Shannon, I had a first date with her over the phone! We had the chance to “feel” each other out and share our hopes and vision for the novel. As I spoke to her, I felt I’d found a partner who was collaborative, open-minded and willing to take on my suggestions. Feeling comfortable with each other, we took the plunge. I am very much a plotter and proposed creating an online document where we outlined the story and provided input for each other. We had weekly meetings and set out our goals and objectives. As we worked together, we learned that our strengths and weaknesses complemented each other – Shannon is meticulous and detail orientated while I am more focused on the big-picture.

How did you decide to incorporate current political and social events?

Shannon: I grew up in rural North Carolina and when I was young, the entire county I lived in was 100% Protestant. Our country is becoming more and more diverse, and as it does, it’s critical that people with different cultural and religious backgrounds learn to live in harmony.

Naheed: Married to a political scientist, I firmly believe that kids should know how political systems work, and how it impacts them, both globally and nationally. Syria is reeling from years of war, a conflict which the United States was, and is, involved in. Half of Syria’s population are now refugees, such as Noura’s family. In addition to being aware, kids should know their rights and how to defend them. This is critically important at this time in our nation’s history – we have a president enacting laws that go against the very ethos of American values and who is spreading “phobias” and “isms” – Islamophobia, homophobia, xenophobia, racism and anti-Semitism.

Why do you think it’s important for readers to understand the importance of the First Amendment?

Shannon: I think it’s important to understand how the First Amendment actually works. I have talked with several people who lament prayer being banned in public schools, and that is not the case. Kids can bow their heads and pray before a test, before lunch, anytime. What is not allowed is for an educator to lead a public prayer, thus forcing one religion on students of many different faiths.

Naheed: Many would argue that the First Amendment is at the heart of what it is to be a democracy. Key components of it are interwoven within Flying Over Water. Jordyn and Noura grapple with the issue of freedom of religion when they decide to set up a prayer room for all the kids at school. When the room is challenged, they pursue the rights of assembly, free speech, and petitioning the government.

What do you hope readers take away from Jordyn and Noura’s story?

Shannon: I hope students who may not be familiar with Islam, step inside the Alwan family home and see there is nothing to fear. I especially love the passages in Mama’s kitchen. The food served is probably different than in the kitchens of many of our readers, but I think they’ll recognize the feelings of love and warmth to be found there.

Naheed: My hope is that kids empathize with Noura and Jordyn’s story and realize they have a great deal in common with both. They, like kids all around the world, want a safe place to grow up and pursue their hopes and dreams. As we tremble on the brink of another war in the Middle East with the assassination of an Iranian general, I hope that our readers pause and question what causes conflicts, what we can do to prevent them, and examine the consequences to people caught in the terrible midst of them.


“At Bayshore Middle School, Jordyn serves as school ambassador to Noura and her family, who were recently granted asylum after living for two years in a Turkish refugee camp. Jordyn begins experiencing panic attacks and is learning to deal with her anxiety as she helps Noura cope with the prejudice and hostility she faces in their Florida community following the enforcement of President Trump’s 2017 Muslim Ban.” –PW; category of Mental Health

[Scholastic Editor Andrea] Pinkney believes it’s important to remember that MG characters coping with mental health issues are multifaceted, “like all kids.” She adds, “For editors, that’s part of the opportunity to pull off that veil of stigma and present the characters as fully rounded individuals.” She notes that in the novel Flying over Water by Shannon Hitchcock and N.H. Senzai (Scholastic Press, Oct.), main character Jordyn suffers panic attacks, “but she is a great friend and a talented swimmer; she has many wonderful qualities.”
https://www.publishersweekly.com/pw/by-topic/childrens/childrens-book-news/article/83006-eye-on-middle-grade-spring-2020.html