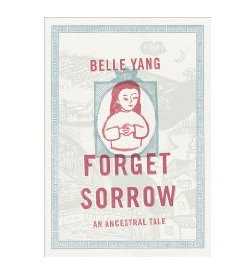 When Belle Yang returned home after college, fleeing an abusive stalker-boyfriend, her father regaled her with stories about his family in Manchuria during the Second World War. Fleeing the ravages of war, four brothers–one of them Belle's grandfather–had reunited in the family home, where they chafed against a traditional father, the Patriarch. Belle's father named her Xuan–"forget sorrow"–and in narrating and illustrating the lives of her ancestors, Belle finds the strength to honor both her father and herself.

FORGET SORROW has one foot in the artistic milieu of Marjane Satrapi, it has another in Irving Howe and the great American tradition of ethnic literature reckoning with Old World ancestors, and a third foot–if that were possible–in William Shakespeare, as Belle’s great-grandfather, like King Lear, drastically misjudges his children, while the world he knew dissolves around him.

Forget Sorrow has one foot in the artistic milieu of Marjane Satrapi, it has another in Irving Howe and the great American tradition of ethnic literature reckoning with Old World ancestors, and a third foot-if that were possible-in William Shakespeare, as Belle’s great-grandfather, like King Lear, drastically misjudges his children, while the world he knew dissolves around him.

“”Forget Sorrow is Yang’s first graphic novel-and as it turns out, it’s a world she inhabits like the most fluent of natives.””
– San Francisco Chronicle

When Belle Yang returned home after college, fleeing an abusive stalker-boyfriend, she found comfort in her father’s tales of his family’s plight in Manchuria during the Second World War. Belle’s great grandfather, “the Patriarch,” had lorded over a prosperous estate before conflict, famine, and later, Communist oppression diminished his power and divided his family. “In wonderfully dreamy-and often nightmarish-black-and-white images” (San Francisco Chronicle), Belle, whose father named her “forget sorrow” to mark a new beginning for himself and his family in America, finds the strength to honor both her father and herself in recalling the lives of her ancestors.

“A gem of a book. . . . Yang’s interweaving of her own travails with those of her grandfather in chaotic post-imperial China tugged at this cynical journalist’s heartstrings.”-Adam Najberg, Wall Street Journal

“Breathtakingly lyrical and poignant…’Forget Sorrow’ is Yang’s first graphic novel-and as it turns out, it’s a world she inhabits like the most fluent of natives.”-Jeff Yang, SF Gate

“[A] wonderful, beautifully drawn story that shows the pain, joy, and terror of an ancestral tale.”-Judith Ellis, Huffington Post

“[R]iveting . . . Yang’s story, which balances her own struggles with those of her ancestors without clumsily trying to equate them, echoes both with the tragic darkness of King Lear and the clean austerity of classical Chinese poetry.”-Publishers Weekly

“The experience of turning these pages, like troweling deeper and deeper into the earth, is hypnotic…Yang’s expressive drawing is the same bold and earthy black of R. Crumb, but thicker-in a metaphorical sense, as well as a literal-and done with a rougher, hastier brush, as if something imperative were pushing it from behind.”-Melissa H. Pierson, Barnes & Noble Review

“Bringing to life a story that spans multiple generations, governments, and continents, the comic-strip format feels more immediate than a biographical novel, realistic than a TV mini-series, and honest than a movie could ever be…. [U]ncommonly enriching.”-Giant Robot

“Yang spins out the story in concentric eddies and whorls, an excellent reverberation of her black-ink style…”-Francisca Goldsmith, Booklist

“Yang has created a story that is both personal and multigenerational…There’s such detail and texture to this book. Some moments are as brief as a single drawing panel but stayed with me to the end.”-Susan Henderson,The Nervous Breakdown

“[A] comic book epic. … Forget Sorrow is one of the year’s best graphic novels. Read it and you will never want it to end.”-Leroy Douresseaux, Comic Book Bin

“Yang uses the graphic novel format for its full potential-to add layers on layers, and also to do what comic art does best: universalize the particular by stripping away everything to an outline….Yang’s memoir deserves space next to the great graphic-novel personal histories.”-Richard von Busack, Metro Silicon Valley

“[B]eautifully, lovingly illustrated in pen and ink…. Forget Sorrow is a moving family story integrating history and culture, as well as the story of a Chinese-American woman trying to reconnect with her heritage.”-Boston Bibliophile

“[A] multi-layered creation that details [Yang’s] story of becoming an artist/writer with her father’s family tales…. From the family’s epic beginnings to their near deaths in the 20th-century Communist terror, Yang draws strength from her ancestors, finding her own power to claim the very unique voice someone else tried so hard to destroy.”-Terry Hong, The Bloomsbury Review

“The strains between parent and child depicted here recall Art Spiegelman’s attempted reconciliation with his father in Maus. . . . Forget Sorrow: An Ancestral Tale illuminates the tides of early twentieth-century Chinese history which sweep over one extended family…. Yang writes and draws the Chinese soul, capturing its phraseologies and philosophies.”-Paul Gravett, Times Literary Supplement

“East meets West in this occasionally playful yet profoundly moving graphic memoir. Yang has never [before] offered the level of psychological reflection and familial revelation shown here. It’s a tale of Taoism and Buddhism, with the meditative state wondrously captured by the artist. A transformational experience for author and reader alike.” – Kirkus Starred Review

“Once in awhile, one of those books (or, in this case, graphic novels) comes along that just changes you — for the good. Forget Sorrow is one of those rare gems.” – Katie Monnin, Diamond Bookshelf

“”I have long been a fan of Belle Yang’s art and writing, and Forget Sorrow is a wonderful display of her prodigious talents. I am moved by her honesty and humor, mesmerized by the amazing history of her family. While her story is deeply personal, it is also magical, nearly mythic. It reminds us that we all have unknown family histories, which, once revealed, can become the parables that change us profoundly.”” – Amy Tan