PETE THE CAT AND HIS FOUR GROOVY BUTTONS 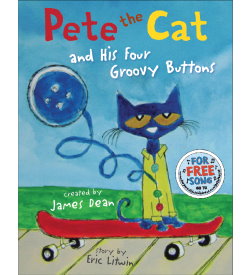 Pete the Cat is wearing his favorite shirt—the one with the four totally groovy buttons. But when one falls off, does Pete cry? Goodness, no! He just keeps on singing his song—after all, what could be groovier than three groovy buttons? Count down with Pete in this rocking new story from the creators of the bestselling Pete the Cat books.

In his fourth picture book, Pete the Cat loves (and sings about) the buttons on his yellow shirt, but when they pop off one by one, he doesn’t freak out: “Did Pete cry? Goodness, no! Buttons come and buttons go.” In bold, primary colors, the number of buttons remaining on the shirt appears at left, both as a numeral and written out, and the diminishing buttons are represented in basic equations (3-1=2). Even after all his buttons are gone, Pete takes it as a cue to go surfing. Readers who need a reminder not to sweat the small stuff will find a model of unflappability in Pete. Ages 3–7. (Publishers Weekly) Amazon Best of the Year Round-up

Amazon Best of the Year Round-up