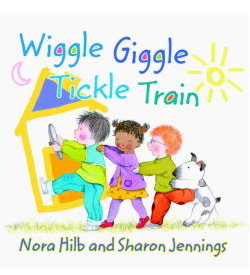 Audience: Ages 2 and up

"Hold on to the saddle, pony might prance, bucking and frisky, he's roaming the ranch. GIDDY-UP!"

A pony inspires a child to ride high on her father's shoulders, a sailboat stirs two others to set off to sea in a cardboard box, and an airplane invites kids to soar like a bird.

In 13 striking spreads, we see how children use the world around them as the inspiration for play. Vibrant photographs are juxtaposed with lively drawings to reveal the child's own inventive interpretation. Short bursts of action-packed, rhythmic poetry encourage preschoolers to identify the patterning throughout the text and the sounds associated with each idea.

While developing language skills, kids can join in the fun as they create their own imaginative play from what they see around them.


PreS—Thirteen short action poems encourage children to play with language and to express themselves in play. A photo of a white duck swimming is paired with the rhyme: “Jump in and paddle/webbed feet can dabble./Splishing and splashing and waddling say…/Quack!” Below it is an image of a child playing in the tub with a rubber duck. An illustration of a picket fence missing one of its posts accompanies the rhyme: “Tongue gives a wiggle,/tooth gives a wriggle./Grin with a gap as you say peekaboo./Smile!” The picture depicts a baby showing his teeth while a preschooler looks at his missing tooth in a mirror. Preschoolers will enjoy looking at the beautiful color photographs, listening to the poetry, and mimicking the actions. A great choice to encourage parents to interact with their children in imaginative-play activities.

A great choice to encourage parents to interact with their children in imaginative-play activities.

Whether you consider [it] poetry or story, this would be an excellent book for one-to-one sharing with a toddler. Recommended.

“Bouncy rhyming verses use simple language and great rhythm to engage the youngest listeners. An enthusiastic salute to the power of imagination.”