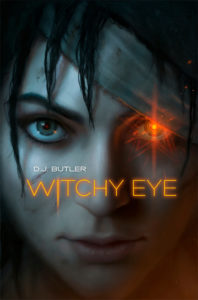 The first in a trilogy,
Witchy Eye is an epic flintlock fantasy set in an alternate nineteenth century America ruled by ancient gods, divided by profound hatreds, and broken by treachery …

Sarah Calhoun is the fifteen-year-old daughter of the Elector Andrew Calhoun, one of Appalachee’s military heroes and one of the electors who gets to decide who will next ascend as the Emperor of the New World. None of that matters to Sarah. She has a natural talent for hexing and one bad eye, and all she wants is to be left alone—especially by outsiders.

But Sarah’s world gets turned on its head at the Nashville Tobacco Fair when a Yankee wizard-priest tries to kidnap her. Sarah fights back with the aid of a mysterious monk named Thalanes, who is one of the not-quite-human Firstborn, the Moundbuilders of the Ohio. It is Thalanes who reveals to Sarah a secret heritage she never dreamed could be hers.

Now on a desperate quest with Thalanes to claim this heritage, she is hunted by the Emperor’s bodyguard of elite dragoons, as well as by darker things—shapeshifting Mockers and undead Lazars, and behind them a power more sinister still. If Sarah cannot claim her heritage, it may mean the end to her, her family—and to the world where she is just beginning to find her place.

A brilliant Americana flintlock fantasy novel set in a world of Appalachian magic that works.

Game of Thrones meets Last of the Mohicans …


“… you can’t stop yourself from taking another bite…and another…and another…I didn’t want to stop reading…. Kudos!”

“Excellent book. I am impressed by the creativity and the depth of the world building. Dave Butler is a great storyteller.”

“Witchy Eye is an intricate and imaginative alternate history with a cast of characters and quirky situations that would make a Dickens novel proud.”

“… In WITCHY EYE, we’re given alternate history, fantasy, and alternate mythology thrown into a blender and oven that results in a cake that is deliciously off-balance, one that tastes different, but in a way that you can’t stop yourself from taking another bite…and another…and another…I didn’t want to stop reading…. Kudos!”

“…Impressed by the creativity and the depth of the world building. Dave Butler is a great storyteller.” – Larry Correia

“WITCHY EYE is an intricate and imaginative alternate history with a cast of characters and quirky situations that would make a Dickens novel proud.”

“David’s a pro storyteller, and you’re in for a great ride.”

“…Butler manages to mash up early American history and epic fantasy in a fascinating, grittily-flavored world of living legends.”

“… a fascinating, grittily-flavored world of living legends. Hurry up and write the next one, Dave.”

“This is enchanting! I’d love to see more.”

“This is enchanting! I’d love to see more.”

“Witchy-Eye is a brilliant blend of historical acumen and imagination, a tour-de-force that is at once full of surprises and ultimately heart-warming. This is your chance to discover one of the finest new stars writing today!”

“A gritty, engrossing mash-up of history, fantasy, and magic. Desperate characters careen from plot twist to plot twist until few are left standing.”

“Butler’s fantasy is by turns sardonic and lighthearted; the story will appeal to fantasy readers of all stripes.”

In an alternate North America where magic is pervasive and the Appalachians are under the boot of Emperor Thomas Penn, 15-year-old Sarah Calhoun, youngest daughter of imperial war hero Iron Andy Calhoun, is content with her rural Tennessee tobacco-farming life, in which she gets to cast the occasional small spell. She’s mostly come to terms with having a “witchy eye” that’s been swollen shut since birth. When the priest Thalanes, an acquaintance of Andy’s, arrives and helps to reveal that Sarah is not a Calhoun daughter but carries royal blood—and is being hunted by humans and magical entities in the service of the emperor—she flees with the priest and her smitten, protective cousin, Calvin, to find help in low and exalted places, reclaim her heritage, and discover what she’s capable of when her eye finally opens. Butler’s fantasy is by turns sardonic and lighthearted; ghoulish shadows claw into the most remote areas and heroism bursts out of the most unlikely people. Sarah is the epitome of the downtrodden hero who refuses to give up until she gets what she needs, and her story will appeal to fantasy readers of all stripes. (Mar.)

WITCHY EYE, D.J. Butler’s major-publisher debut, is dense and packed full of ideas, but it all fits together seamlessly. It’s a wild quest fantasy, but it layers in complex political intrigue, innovative magic systems, and a warped, slightly more inclusive alternate history as it speeds along. It might sound overwhelming, but the deep world design and unforgettable characters make it go down easy, a fast-moving and intriguing read, titanic scale and epic scope aside.

Butler’s worldbuilding is truly special. This is an ambitious book, sketching out numerous political, religious, and cultural systems for every region the characters travel through. The background for the area is one steeped in myth both based in American history and completely fabricated, with beastmen, wild gods, the founding fathers, magical artifacts, and the Mississippi River as the source of powerful magic. Magic in this world is similarly diverse, blending hexing, voodoo, and latin phrases that require mages to draw power from ley lines through focus amulets. It speaks to how deep and dense the world is that every character has their own understanding of how the world works, filtered through the systems available to them. The depth and density also makes the world feel incredibly vast—a day’s journey can take them through several exotic, fully realized locales.

A world full of such dense beliefs, legends, and laws would of course be incomplete without larger-than-life characters, and here, too, Butler excels, building up a memorable cast through point-of-view chapters, dialogue, snippets of stories, and offhand comments, building them up even before they appear on the page, even granting each their own unique vernacular.

Flintlock fantasy isn’t a genre that often leaps into epic scope, so when it does, that’s ambitious enough on its own. What makes Witchy Eye even better is that D.J. Butler goes beyond, and gets so much right in the process. This is a breathtaking heroic saga that pays off in a really satisfying way. Between a world so deep you could get lost in it and a massive, distinct cast, Witchy Eye seems poised to bring Butler’s work to a wider audience (his other popular series, The Remaining, was initially self-published). With a book like this one, it’s an audience he definitely deserves.

A stunning debut fantasy from D.J. Butler which presents an alternate history for North America, where Appalachian folk magic has shaped the landscape and society. Appalachee fifteen-year-old Sarah Calhoun finds she has a natural talent for hexing and one bad eye. All she wants is to be left alone—especially by outsiders. But Sarah’s fate calls, and a quest for her destiny leads her across an American landscape strangely transformed, with a trip to the Renaissance-style Nashville Tobacco Fair, an encounter with not-quite-human Firstborn Moundbuilders, and desperate fights with shapeshifting Mockers and undead Lazars. All of this leads to a final confrontation with the Emperor of the New World and Sarah’s hidden destiny.