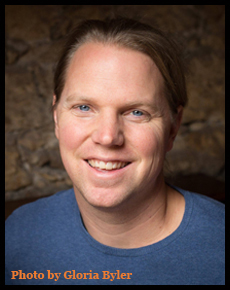 In second grade, Kelly Crull's teacher gave him a blank picture book and told him to fill it with his own story. He filled an entire bookshelf at his school library with his stories. His joke book even had a waitlist!

Even when he was not in art class, Kelly would fill his notebooks with doodles and sketches. When he had to make a bug collection for science class, he flipped through the encyclopedia and found all kinds of interesting bugs that he wouldn't be able to find in Iowa. So instead of catching bugs from his backyard, he crafted out of paper his own collection of exotic insects from around the world.

At university, Kelly's writing professor gave him some advice he would never forget. He told him to fill his life with adventure, so he would always have something to write about. Kelly studied in Europe and eventually settled in Spain where he still lives with his wife and three children (and yes, he has been to the running of the bulls).

In addition to being a writer and illustrator, Kelly has worked as a musician, a photographer, a web designer, the director of an artist collective, a stay-at-home dad, and even a pastor. Kelly loves to do lots of different things, but what he likes to do best is tell stories.

Kelly is the author of a parenting book, Becoming Dad, and a short stack of children’s books including most recently Washed Ashore: Making Art from Ocean Plastic. His parenting videos have appeared on Good Morning America, The Today Show, Slate.com, Marca.com, and have received YouTube's "Top 50 Videos of the Week" award.