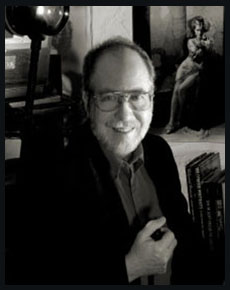 Mark A. Vieira is a photographer who writes books about classic Hollywood, using archival treasures to weave seamless narratives of bygone glamour. He’s given a voice to luminaries like Boris Karloff, Greta Garbo, and Jean Harlow. He publicizes his books with exhibitions of photographs that he prints by hand from original Hollywood negatives, turning silver nitrate into golden iconography.

In 2010 Mark’s forty-first anniversary as a professional photographer was celebrated by “The Glamorous Gaze,” an exhibition at the University of Southern California’s ONE Archives Gallery.

Mark has appeared on camera in Photoplay Productions’ Garbo, on CBS Sunday Morning, and in the 2011 BBC documentary Shooting the Stars.

In June 2013 Mark entertained a capacity audience in the historic Orpheum Theatre for the L.A. Conservancy’s presentation of Ben-Hur. In July 2013 Mark appeared on NBC’s The Today Show.