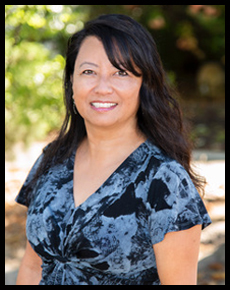 Natasha Yim is the author of 7 picture books: Otto’s Rainy Day (Charlesbridge, 2000); Cixi, The Dragon Empress (Goosebottom Books, 2011); Sacajawea of the Shoshone (Goosebottom Books, 2012); Goldy Luck and the Three Pandas (Charlesbridge Publishing, 2014); The Rock Maiden,  (Wisdom Tales Press, 2017); Mulan’s Lunar New Year (Disney Press, 2018), and her latest book, Luna's Yum Yum Dim Sum, a Storytelling Math book, which was released by Charlesbridge Publishing in December 2020.  Goldy Luck and the Three Pandas was a Junior Library Guild and Scholastic Book Club selection, and was nominated for the Illinois Monarch Kids’ Choice Awards. The Rock Maiden was a 2017 Foreword Reviews Award Finalist, and Sacajawea of the Shoshone was nominated for the Amelia Bloomer Project Booklist in 2012.

Natasha grew up in Malaysia, Singapore and Hong Kong before coming to California in 1979 for college. She enjoys writing stories inspired by her cultural upbringing and her many travels. She received her B.A. in English Literature with a Writing Emphasis and an M.S. in Counseling Psychology from Dominican University in San Rafael, CA. Most of her job career has been in counseling or social work. She worked with Mendocino County Child Protective Services, and with kids in residential treatment centers, and group homes. It was here, reading and telling stories to kids who were away from their families, that she discovered the power of stories to soothe, comfort and inspire children. She decided she wanted to write books for kids. Natasha currently works part-time as a grant manager for the Mendocino County Office of Education.

Natasha’s upcoming books are “Like Mother, Like Daughter” (Disney Worldwide Publishing, Spring 2022), based on the Pixar movie, “Turning Red” (Spring, 2022), and a Little Golden Book based on another Pixar film, “Lightyear”, which will be released sometime in Summer 2022. She is currently at work on more picture book projects as well as a middle grade historical fiction.