BEST FRINTS IN THE WHOLE UNIVERSE 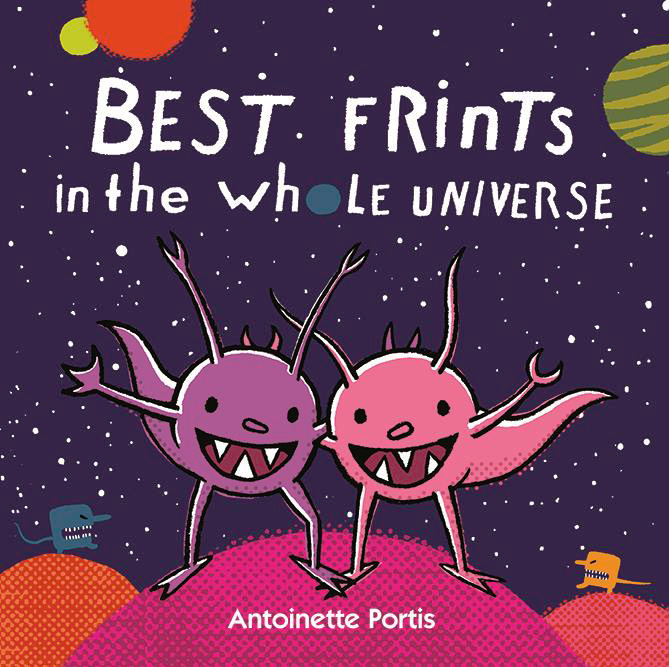 Award-winning picture book creator Antoinette Portis delivers a new universe of cleverness and imagination in this hilarious, sweet, and otherworldly book about friendship.

Yelfred and Omek have been best frints since they were little blobbies. They play and snack, and sometimes they even fight, all in a language similar to but slightly different from, English. When Omek decides to borrow Yelfred's new spaceship without asking (and then crashes it), it sparks the biggest fight yet. Can these two best frints make up and move on?

Two aliens with sharp teeth and tadpole-like tails that (luckily) grow back provide a very funny portrait of the travails of friendship on planet Boborp, “where teef are long and tempers are short.” Portis’s playfully semi-homophonic Boborpian language will have human readers in stitches.


Occasional disagreements and the need to mend a friendship are universal challenges. Omek and Yelfred sport the gap-toothed look of human 5- and 6-year-olds, but with sharper teeth. They are neon-berry colored—Yelfred is purple and Omek is pink—and they have tadpolelike tails and antennae. They have grown up together, eating together and playing eye ball, “best frints since they were little blobbies” among the bright and toothy landscapes of their far-off planet, Boborp. But when Yelfred rides up in a sleek new spossip, a blurfday gift, Omek longs to take it for a spin and won’t take no for an answer. As young readers might predict, the spossip gets shmackled. Yelfred is furious, and Omek is hardly contrite: “It was that way when I got it.” Tail biting and harsh words ensue. “Frints on Boborp have been known to use their teef and not their words. (Not like here on planet Earth),” Portis notes wryly. But a détente follows quickly, involving work with a spewdriver and copious amounts of taypo and twire applied to hold the vehicle together. Portis’ bright, odd landscapes, flora and fauna digitally colored in vibrant hues, and her two grinning friends are all sweetly demented and irresistible. An illustrated glossary appears on the endpapers and invites giggles, imitation, and the addition of Boborpian to languages spoken at home. Cosmically delightful.

Chosen as being “especially worth” of the Kirkus prize

Space aliens Yelfred (the purple one) and Omek (the pink one) “have been best frints since they were little blobbies.” Like any friendship, theirs has its ups and downs, but they always muddle through. Things come to a head, though, when Yelfred receives a new spaceship as a blurfday gift. Omek takes it for a test drive without permission and crashes it (“It was that way when I got it!” tries Omek). An angry battle of words (“YOU SHMACKLED MY SPOSSIP, you double-dirt bleebo!”) and teeth (Yelfred bites off Omek’s tail) ensues. But, as the offstage narrator assures us, best frints can’t stay angry for long—either on planet Boborp or here on Earth. The text makes frequent comparisons throughout between Earth and Boborp, with the differences being in the details (biting off tails) but not in the important stuff (friends play, they fight, they make up). Portis’s text plays it straight—no small feat with all those near-nonsense words—with a clear-eyed, anthropological-sounding reserve that is effective in warding off didacticism. Her digitally colored mixed-media illustrations feature simple shapes—lots of circles and triangles—vivid hues, thick black lines, and pop art–like textures. The front and back endpapers are a photo-glossary of Boborpian words, sure to tickle listeners (and readers-aloud; just try to say“blobbysit” with a straight face).

Employing eye-catching imagery and space lingo that will have children and their adults giggling, Portis emphasizes that friendship can be tricky yet rewarding. Yelfred and Omek, residents of the planet Boborp, have been pals (or “frints”) since they were young. Though these two buddies love to engage in a variety of activities together (they give out “blurfday” gifts, play games such as “eye ball in the peedle pit”—which consists of flinging an eyeball through a sea of gaping maws—and eat “yunch”), they are quick to anger (which never happens on Earth, the author wryly points out). Yelfred and Omek’s interactions do turn a bit rough (harsh words are exchanged, and a tail is gnawed off), but “frintship” prevails in the end. Portis has crafted a witty and energetic work that will appeal to children’s sense of fun. There’s a Tim Burton–esque feel to the zany, dramatic illustrations—Yelfred and Omek are spherical creatures with antennae, tails, clawlike arms and legs, and pointy “teef”)—but also an adorable factor that will endear them to readers. Saturated colors, textured backgrounds, and a pared-down design, full of thick outlines and simple shapes, are ideal for the title’s intended audience. These easily vexed alien pals capture the emotional ups and downs that children experience, and Portis’s creative take adds a fun twist on a well-trod topic. VERDICT Those seeking materials on friendship, especially for storytimes, should add this wonderfully wacky take on the subject.

It’s all fun and games till your best friend bites off your tail. In her latest picture book, Antoinette Portis expertly captures the dynamics of human toddler play in the form of two aliens from planet Boborp.

“Yelfred and Omek have been best frints since they were little blobbies.” This, the book’s opening sentence, gives readers a taste of the creative wordplay therein. Portis also brings readers a Boborpian Glossary on the front and back endpapers—which are, quite possibly, the most entertaining endpapers of the year. There’s almost no need for this glossary, as readers will run with the alien words, assimilate quickly and have a blast.

On planet Boborp, “teef” are long and tempers short. This, Portis notes with a knowing wink to the reader, is not at all how it is on Earth. Heightened emotions and fierce loyalties are the name of the game, as Yelfred and Omek’s playdate—starting with a “nice yunch”—devolves into a mighty meltdown. After all, frints on this planet tend to “use their teef and not their words.” Not like on Earth, of course. When one frint bites the other’s tail off—don’t worry, they regenerate on Boborp—the friendship is momentarily ended. Until it’s not. Because this is the way of young creatures, no matter the planet they call home.

Portis’ palette is eye-popping (no pun intended, given that the frints’ favorite game is eye ball in the peedle pit, which involves playing catch with eyeballs) with bright, heavily saturated hues. The humor and pacing are spot-on, and in the closing endpapers, readers will find an invitation to make up their own words. (“Your turp!”)

It’s out of this world.

There’s a lovely phase in family life when a small child starts to pronounce distinct words, every now and then mangling one in such a memorable way that it becomes part of the household argot. At our house, yogurt has for years been “yodit,” and a squirrel usually gets called a “squiller.” In “Best Frints in the Whole Universe” (Roaring Brook, 40 pages, $16.99), Antoinette Portis captures the charm of familiar words mispronounced in a setting that’s out of this world.

In these lively, electric-hued pages, we’re on planet Boborp, where two best frints, Yelfred and Omek, experience emotional turbulence that will be familiar to human readers ages 4-7. Though resembling tadpoles on legs (with antennae and sharp “teef”), these frints eat yunch together and take turps piloting a spossip—but, alas, their play sometimes devolves into squabbling. Fortunately, “on planet Boborp, frintships can grow back,” we read, with the gentle authorial reminder: “(Just like here on planet Earth.)”