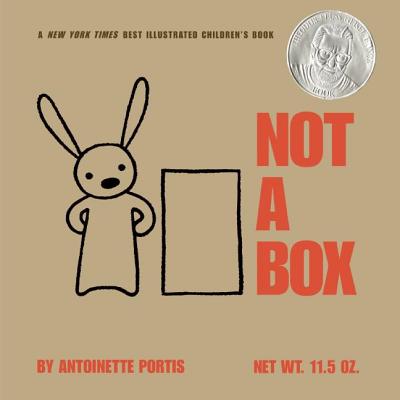 A box is just a box . . . unless it's not a box. From mountain to rocket ship, a small rabbit shows that a box will go as far as the imagination allows.


“Dedicated ‘to children everywhere sitting in cardboard boxes’, this wonderful little book perfectly captures the amazing capacity of a child’s imagination to create endless possibilities out of a humble box. Brilliantly illustrated with a cute bunny (bearing a passing homage to the graphic minimalism of Duck Bruna’s Miffy), the box becomes all manner of wonderful things, from a rocketship to a hot-air balloon – anything but a plain old cardboard box. A super book that’s as close to perfection as a picture book can get!”

“Simple and appealing… Nicely packaged in a cardboard cover, it looks like a kids’ classic in the making.”

“A stylish paean to the imagination for two- to four-year-olds.”

“A stylish paean to the imagination for two- to four-year-olds.”

“This fashionably simple book has Rabbit encouraging young children to explore imaginary worlds whilst sitting in a cardboard box – on land or water or up into space. Great fun.”

Wrapped in basic, grocery-bag-brown paper, this streamlined book visualizes a child’s imagined games.  “Why are you sitting in a box?” reads the opening page, opposite an image of a small rabbit, drawn in the simplest, unshaded lines, who appears next to a square.  “It’s not a box,” reads the text, presumably in the rabbit’s defiant voice, on the next page, and equally simple red lines overlay the black lined rabbit and box to show a speeding roadster.  In the following spreads, the questioner (a clueless adult?) continues to ask about the rabbit’s plans, while the little voice answers with the book’s protest of a title.  This owes a large debt to Crockett Johnson’s Harold and the Purple Crayon (1955). And as in Johnson’s classic, the spare, streamlined design and the visual messages about imagination’s power will easily draw young children, who will recognize their own flights of fantasy.